okay, i’m doing another encaustic demo.  this blog is full of encaustic painting demos.  and i never get tired of doing them, either.  so here’s yet another one.

while i was on residency in the west of ireland last year, at cill rialaig, i was very taken with the idea of a series of paintings exploring the elements.  things like paintings of only rocks, paintings of only skies, only water.  i dreamed of painting the air, but that’s just about as difficult a thing to paint as you can think of.  painting nothing would be harder, but only just.

i spent my studio time a lot more prosaically, painting tourist pictures and gifts for people who don’t like my more experimental experiments with art.  there was one artist there who liked me right up until the moment she saw the paintings i was working on.  this was an artist whose name is being made right this second by inscrutable museum-quality art involving springs and piano wires.  she was so upset that she told me about her disappointment as if she was talking about another artist altogether, but her heartfelt looks when she confessed that this artist’s work was awful gave her away.  and i’ve never heard from her again, of course, but this is the way it goes on residency; you make instant friends that you never hear from afterwards.  artists pissing in the night.

anyway, on to the work.  you can see the reference photo on the left of the pastel outline.  it was one of those cloudy days were all the color is in the sky.  the light comes peering thru the cloud in vast beams, and there’s nothing as bright as that silvery gleam where the light is hitting the water.  you can only barely see the peninsula just a mile or two across the bay, and there are places were the water comes out of the clouds and fogs the space between cloud and ocean with rain that’s more like thick smoke.

the trouble with water being the entire picture is that there’s no real difference between water in its various states.  just varying shades of visibility, really. 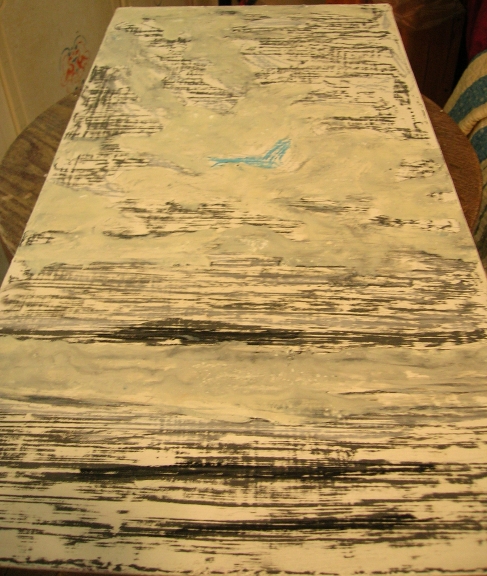 there happened to be a roughly 1:2 board all ready to go, so i took it off the stack and started in.  there’s a stack of boards all gessoed up, all sorts of sizes.  this one is 12″x24″ gessoed masonite (or whatever they’re calling it now) and i’ve dragged pastel all over it as merely placemarks.  my method for transferring the image from the reference photo to the board is to stand about 5′ back and hold the photo up in front of my face, covering the board as much as possible.  then i focus my eyes on a detail and whip the paper aside, noting where it falls on the board.  then i rush to the board and swipe a line right there with my pastel, and go back to my position and pick another spot to focus on.  easy.

there are good points and bad about this method.  using a projector also has its good and bad points.  in general, i prefer the distortions of my own eyes to the distortions of a projection lens, so i usually go with that.  and abstracting my marks to only the most obvious and important ones is usually the best way for me to go, lest i get caught up in the details before i’ve even established the general marks.

in sketching out the painting, i’ve used only black, or dark gray, pastel.  and a touch of blue for the sky.  the light gray stuff is the first layer of wax.  i thought i’d get a picture before going too far.  it looks to me as if i’ve already burned in this first layer.  you can tell that i’m not fixing the pastel before starting in on the underpainting.  i don’t really care if i get pastel all over my underpainting.  there’s going to be so many layers of wax that nobody’s going to know much about the first layers.

here’s a closeup of the next layer (inverted), a darker gray filling in the areas around the light gray.  the blue is still pastel.  ad the black you can see, that’s also pastel.  again, i’m pretty sure i’ve burned this in.  but i’ll let you know if i have some ‘raw’ wax in any of the shots. 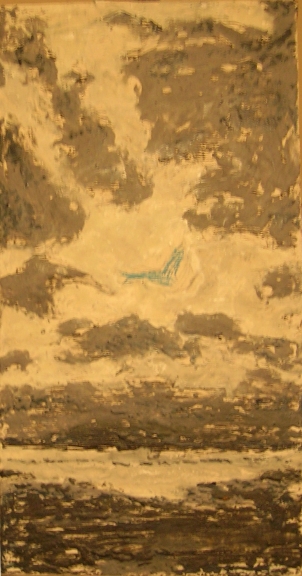 this is the far shot.  i’ve got dark gray in the ocean and the peninsula, and a little in the top part of the clouds. 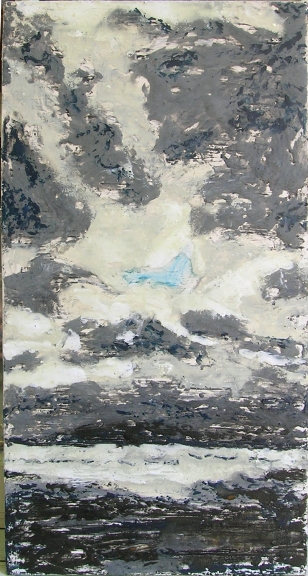 and at this point i’ve started taking the painting outside to shoot progress photos, so it’s a little better picture.  sorry about the quality before.  i’ve added a little more black to the clouds, and more white to the sky and water.  you can only tell i’m doing anything to the water by the progressive breaking up of the thin black line in the middle of the white part of the sea.  i really shouldn’t have bothered putting in that detail so soon, and it will haunt me. 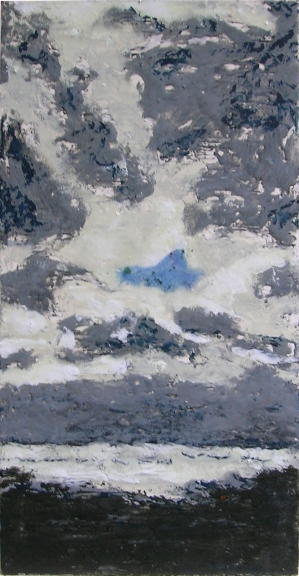 for this one i’ve finally put in some blue paint, but it’s old blue dug out from a hardened lump in cup, and there’s green in it.  oops, so what.  i took the same gray i was using in the clouds, which has a bunch of purple and blue in it, and put it over the peninsula, where it’s now way dark. 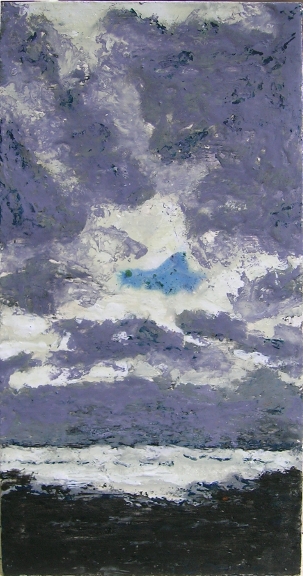 so i took a bunch more of the gray with the purple, and slathered it all over the clouds.  i’m burning everything in before shooting it at this stage, just so you know, and in many cases there’s more than one layer being put on and burned in before i take the next process shot.  else i’d be running outside every half hour with the board and the camera. 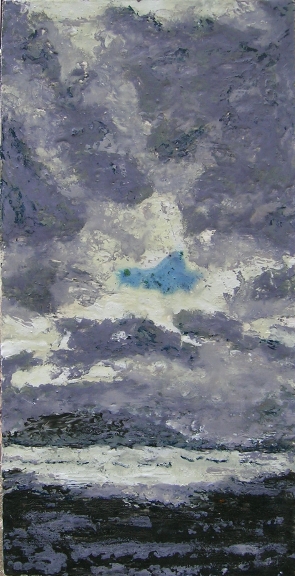 now i’ve gone in and put the same gray in the sea and the shiny area.  and come in with some dark gray and emphasized the peninsula and the darkest of the waves in the foreground. 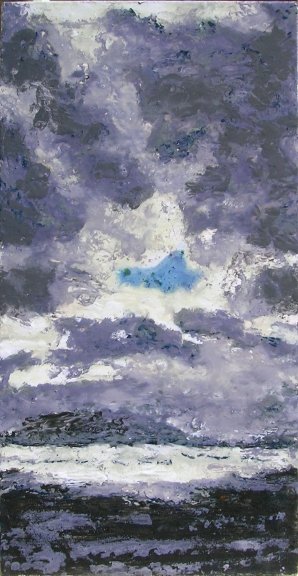 now there’s more darker gray on top of the clouds.  i’ve added some raw umber into the gray mix.  basically my grays are black and white, dioxazine purple, ultramarine blue, raw sienna, a little green, and whatever else i think of. 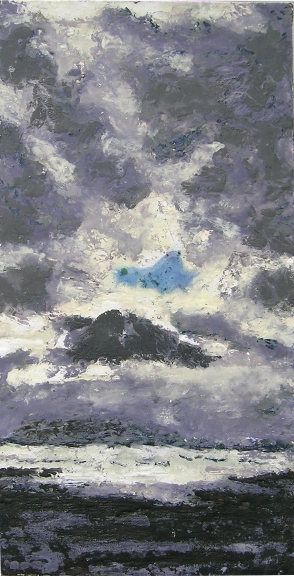 now there’s darker grays over the lowest clouds.  and i’ve begun to come back in with lighter gray underneath that cloud, partially obscuring the peninsula. 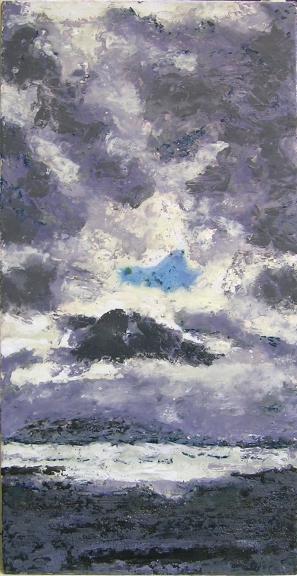 and now some less-than-terribly dark grays over the sea.  at this point i have white, made with bleached beeswax and titanium white pigment, and i have cream, made with regular beeswax and titanium.  and then i have four or five grays, going from very nice bluish dove gray to angry greasy looking toxic sludgy gray and mostly running along the purple edge. 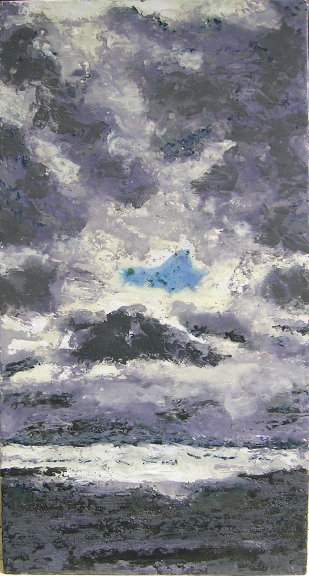 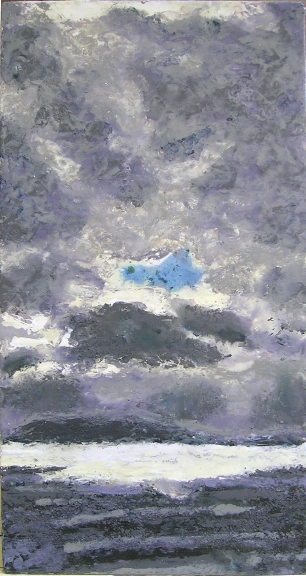 and now the whole thing looks too dark and brooding, so i basically go over the entire thing with light purply gray, and lighten the whole thing up.  the light ocean is gotten a bit polluted by the dark gray thin line, so i add more white and burn the hell out of it.

and then it was getting dark, and i stopped work, brought the painting up to the front porch, and sat out and looked at it while the light went.  it was painfully purple, but almost done.  a funny thing happened.  as the natural light faded and the incandescent porch light took over, the painting got less and less purple, and finally less and less detailed, and flatter, and finally it looked very photographic, almost like the reference photo, which my paintings never turn out looking like the photos.

i was intrigued by this, and wondered what i’d have to do to the painting under natural light in order to get it to look like it did at night under a 40 watt bulb.

this led to a conversation about george beattie, who painted some of his paintings with that would show up when someone flicked on the paintsblacklight that was installed to provide alternate lighting.  seems a little tacky now, maybe, but i’ll bet now people are coming up with high tech ways to do the same thing. 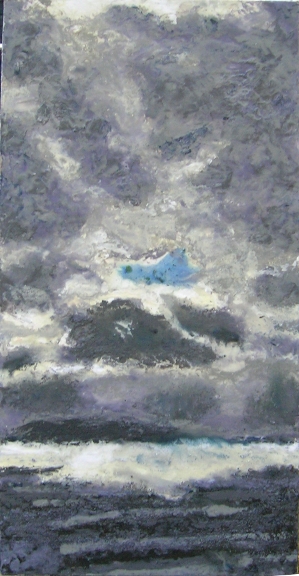 now the white of the ocean is blue, because of that dark line finally disappearing into a churn of white wax.  so i  am going to have to add more white and start again. 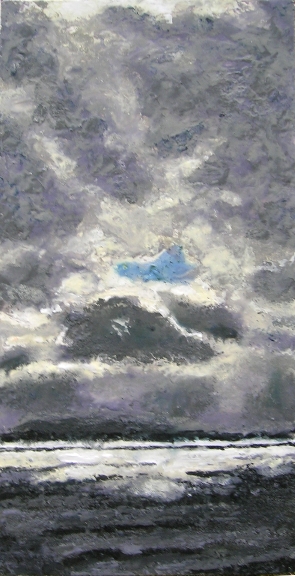 and now i add more black.  i’m messing a little with the cream in the clouds, also. 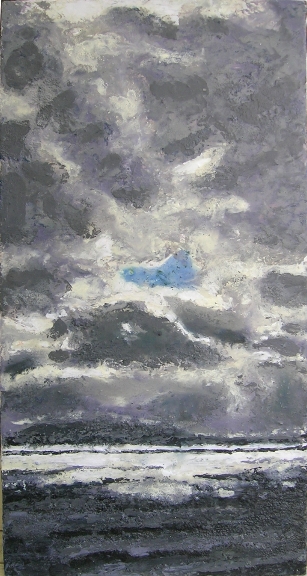 and now the peninsula was too dark, so i’ve obscured that with some more medium gray atmosphere, and added little dark touches to the upper clouds.

and i guess i’m done.  it needs a thin black frame, an some nice buffing to bring out the shine of the wax, and i’m ready to move on to my next painting.  the series will be called elements – water, or maybe kerry water, tho that sounds like a brand.  or maybe just water and air.  anyway, this is number 1.  now i just need a place to show it.

next painting – clouds raining on the ocean, with a barely visible peninsula in the background.  part 2.